ONE CLIENT - ONE SHOW

The Reverend Iain May is the most unlikely TV star……. Who … I hear you ask? The Rev. May, a former high flying corporate banking executive is founder and the head of Castle Community Bank and Acumen has had a big hand in helping him raise his profile and that of the bank  in the most incredible way.

Acumen claimed a stunning run of national broadcast coverage for the Bank, a small community financial institution run from Leith in Edinburgh, the highlight of which was this coverage below on BBC One’s flagship magazine programme ‘The One Show’ which is shown at the peak 7pm slot every weekday evening. The studio guest that evening was Labour Leader, Jeremy Corbyn who congratulated Iain on his brilliant work to offer a banking facility which meant people did not have to use Pay Day lenders and other means of borrowing money to see them through each day.  Here’s the coverage…

However, one element of our work was to tell the story nationally and Acumen arranged this through The New Statesman… but this particular story does not end there. 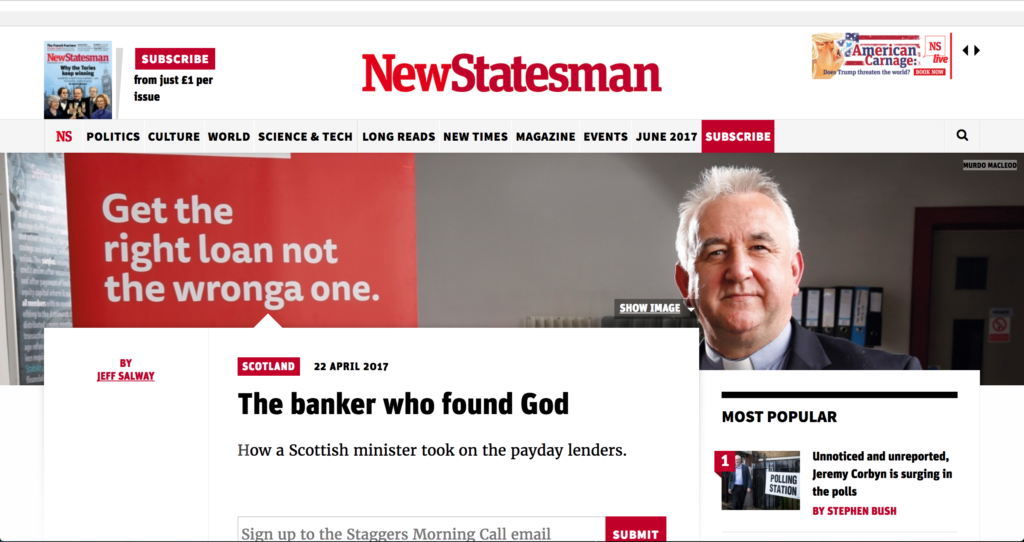 Subsequent interviews were arranged on The John Beattie Programme on BBC Radio Scotland (which ran for 20 minutes), BBC Radio Five Live and Talk Radio.   Not at all bad, for a man of the cloth wanting to ensure people do not have to turn to payday lenders, pawn shops and ‘Cash a Cheque’ – style establishments to tie them over, but create a bank which works for everyone.